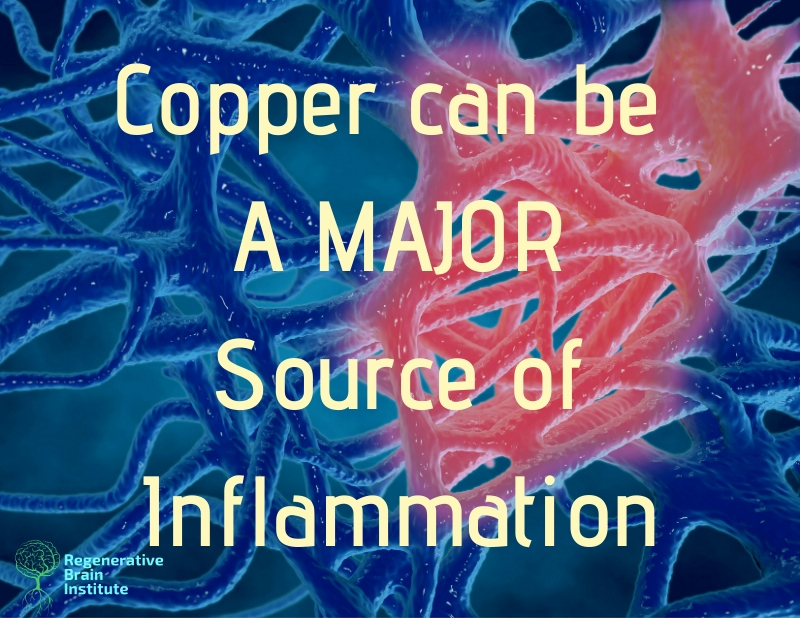 When I consult with many of my clients about their brain fog and memory issues, inflammation is one of the major topics that I explain can be leading to these exact symptoms.

There are a huge number of external factors, gut imbalances, microbiome issues, and a host of environmental toxins and heavy metals, chemicals, food preservatives, food dyes, pesticides, gluten, lectins and food triggers, and therefore a huge list of things that can be causing inflammation and specifically neuroinflammation that can cause brain fog and poor memory, and could be leading to early signs of dementia and Alzheimer's disease.

But, it never ceases to AMAZE me at how often COPPER shows up as a leading cause for INFLAMMATION, whether that is in the brain, the cardiovascular system, the Liver, intestines, Kidneys, Pancreas, Thyroid, and Skin, just to name a few of the target tissues that Copper can lead to inflammation.

Basically, anywhere the body normally has a large quantity of Zinc is where you will find Copper building up and causing  Inflammation.

And this could be mean the Retina of the eye. So eye inflammation and even blurred vision could be a sign of Copper causing inflammation in the eyes.

...Or the Male prostate which is also very rich in Zinc. Therefore many presentations of Benign Prostatic Hypertrophy (BPH) can also be due to too much Copper building up in the soft tissues.

So, where did all of this Copper come from? And, why does it cause so much Inflammation?

Copper Is Found In All Foods

From leafy greens to legumes (beans....chocolate....) coffee, organ meats, mushrooms, grains, seeds, nuts, and....beans, you are going to find lots of Copper in your diet.

Just think about the brown skins of almonds and walnuts and pecans, as well as the brown covering of grains like wheat, which can all contribute to a Copper rich diet.

But even leafy greens and animal proteins all contain Copper as well, especially Liver which is the target organ where Copper builds up firstly in humans as well as all animals.

The top 5 Copper Rich foods you may need to reduce or avoid are:

COFFEE (ouch!)
CHOCOLATE (mega ouch!)
PECANS (....oh no he didn't!)
WHEAT PRODUCTS LIKE BREAD AND PASTA (no.....nope)
ALL SOY PRODUCTS SUCH AS TOFU (well....okay, I can live without that)

So, if you believe that you may have a Copper overload, because you have any one of the symptoms listed in my article on Copper Toxicity Symptoms and Treatment, then you really should remove most if not all of the HIGH COPPER FOODS from your diet.

So, the best foods you should be eating include:

But luckily, you can live a very happy life eating all of these high copper foods, once you have gotten your body back to Copper Balance.

And you can achieve this Balanced Copper Diet through various methods, depending your body's specific Copper handling abilities, which relates to your metabolism and Liver health.

You see, each person handles Copper differently, and therefore there is no one single method or protocol to remove or balance Copper for all people.

Each person requires an individualized process of evaluating a person's metabolic type, stress tolerance, and tendencies for inflammation before they should ever attempt to try to start detoxing or removing Copper from their body.

Follow this link to find out more about our

So, Copper should be attached to a special protein called CERULOPLASMIN, which is a specialized protein that is designed to bind up Copper and help it to get into the cells properly.

If Copper is not bound to this protein, or other similar proteins like Transferrin and Metallothionein, then the Copper floating around your blood is called "Free" or Unbound Copper.

This free and unbound Copper can cause Free-radical damage to your cells and cell membranes, simply because it is highly reactive to the Oxygen O2 molecules found in the blood.

It is similar in metallic properties to Iron, which also has the potential to cause free radical damage to our cells if it also not bound to proteins such as transferrin, Ferritin, or Hemoglobin in the blood.

It is vital to our bodily health that even good minerals and nutrient metals are being properly bound to these proteins, which are called "transport proteins".

So, when there is TOO Much Copper in our blood, and by this I mean "free" and unbound Copper ions floating around and reacting to oxygen, producing Copper oxides, then your tissues and cell membranes can be damaged by these reactive metals and oxygen molecules that give off free electrons which end up damaging our cell membranes through a process termed "Lipid peroxidation" which essentially means that an extra Oxygen molecule which is a product of the Copper oxide in the blood, will oxidize the lipids or the fatty acid fragment of our cell membranes, which denatures these cell membrane phospholipid molecules so much that the cell can be destroyed.....

This damaged cell membrane gives off signals called "Damage Associated Molecular Patterns", often referred to as DAMP's, which are basically fragments of the cell membrane that gets destroyed and release by the cell.

These DAMP's damage associated molecular patterns will then land on receptors on our immune cells which are called TOLL LIKE RECEPTORS (TLR's).

This is where INFLAMMATION really comes from !

When Copper-induced damaged cell membrane fragments land on the Toll-Like Receptors of our immune cells, it starts the DNA signaling process called the Nf-Kb (nuclear factor kappa beta) pathways which causes our cells to produce the Inflammatory Cytokines IL-1, IL-6, IL-17 and many others, which causes our immune system to start reacting and causing inflammation throughout the affected area, leading to swelling, redness, and even more damage to the cells and tissues.